That is one of my nicknames for George (or any of the kiddos that happen to be in the vicinity), but G gets it most often because he can't run away from my obsesive snuggling yet.  So, you will imagine my surprise when little Peanut Pie ate some peanut butter on a waffle and this happened to his face... 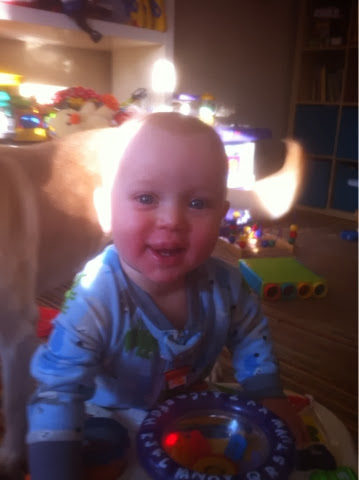 Nothing like a little angioedema to make you wonder about what you're feeding your baby.

Anywho, I think we'll be laying off the peanut butter for a while now.  Although I'm a little confused because I know he's eaten some thai peanut noodles I amde that had a cup of peanut butter in it that didn't give him any reaction and I'm wondering what the difference is.  It is also perplexing because Stan might as well be a walking peanut butter jar given the amount he eats and how it is constantly smeared across his face, hands, clothes, and in the webs of his chubby, sticky fingers.  It is a wonder that George hasn't gotten a good dose just from sitting next to him at dinner.  The scientist in me wants to test a few theories out to see what happens, but I don't think George wants to be my little lab rat (party pooper!).


This is the food that's been getting all the attention in my house lately. 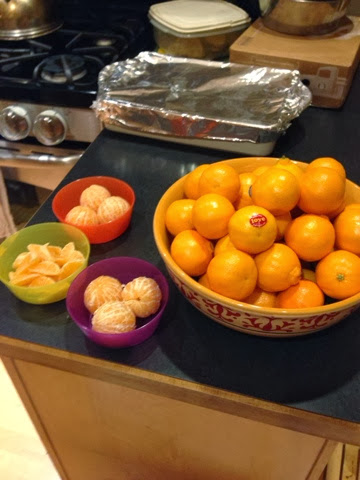 The boys eat clementines like they'll never see food again.  I honestly buy three 6 pound bags each week I'm at Costco and we still usually run out before the week is out.  As Jerry said last night "I fear our grocery bills someday", or my pediatrician who told me "Forget about saving for tution, save for nutrition".  Dave and Frank each eat 6 clementines at night before bed and Stan eats 2-3. Just to clarify, by eat, I mean he sucks the juice out and leaves annoying dried out carcasses of clemmie sections strewn about my house - ugh, that kid.  That is not counting the dozens I peel all day long too.  My thumb eventually gets the citrus acid wedged beneath the nail and is all sore, red, and caustic and then I really know we're in citrus season. "Clementine thumb injury time" means that "kids begging bites off my ruby red grapefruit sections I carefully peel for myself" is soon to follow. Love it.

You remember how it works?  I spout off unrelated things until you get bored and click somewhere else. Unless you're my Mom who savors every word about her grandchildren and reads through the drivel about me just to get to more exciting stuff about her grandsons, or you're Jerry who reads under duress because he knows he has to.

Love it every time.

Holy Cats. At first I was just busy, then I couldn't get in my groove to write, then I just got embarrassed that I hadn't written anything in AGES, and now I'm back to do my penance, proclaim mea culpa and get back in the saddle.  Let's just be friends and pretend like the break never happened?  Thanks chicas.

Annoyingly, I'm going to harken waaaaaay back to Halloween and make you read through a holiday that no one cares about anymore because Thanksgiving is fastuponus.