Jerry and I like to joke that we have Sour Patch Kids, at first they are nothing but squeeze your eyes shut and pucker your mouth sour.  Then, if you can stick it out with them for a bit they get sweet with a little time. 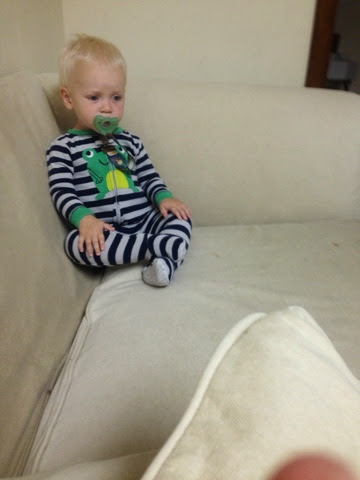 Some of them are a bit more Sour Patchy than others - say Stan and George at the moment.  These two are not only out to get me to turn in my Mom license and leave and premises, but they are constantly going at each other. (photos in motion are clearly my forte)

I am trying to remember if Dave and Frank did this too, and my addled sieve-like brain can't seem to remember anything more than 12 minutes ago and since I never put together anything close to a baby book for any of my kids I guess we'll never know for sure and I can just make it up and revise history as I see fit.

Of note, on the baby book thing.  At first I didn't do one for Dave because I naively thought, how could a mom ever forget all those cute moments in a baby's life?  The first smile, the first solids, the cute new words, the giggles and the bath times would all indelibly be marked on my brain.

When Frank came along and I started losing track of who got a tooth at 14 months and who hit the ten pound mark when, I started thinking it might be a good idea to write some of this stuff down, but I really never found the time.

With Stan I really started to panic and thought that every boy's childhood would barely be memorable to me but by then I couldn't remember too much about Dave's fuzzy babyhood and I didn't want everything to be unfair, so I just scrapped the idea of starting one for Stan only.

Now with George I find that when Jerry shows me a baby photo of one of the boys I incorrectly identify it 87% of the time because they are all clones.  I have also started making up their birth weights when asked on medical forms because the only one I know for sure was Dave's because he was a super tiny preemie that scared the bejeezes out of me at 4# 6oz.  Why do they need to know anyway? I'm a doctor and I can't figure it out. Doesn't seem to important, so 6# 13oz sounds about right.

Ranting aside, back to my bickering littles, right now I'm feeling like Dave and Frank did fight.  I have a vague memory of Dave always trying to step on Frank's head to see if I would respond (I usually did) and that they consistently fought over toys, my lap, the same breathing space, and I think some biting was involved.

Stan and George are following in those footsteps and their jealousy runs deep.  I always secretly wished that boys would fight over me, and now sister, I got my wish - four fold.  I swear when one climbs on my lap the other can sense it from across the house and comes running to gut it out for Mom Lap Dominion.  They are not too into the "each of you take a leg" compromise either.  They are more of the "push the other one off the lap to their death and/or injury" ilk.

Ah, the peace and serenity of my house is palpable. 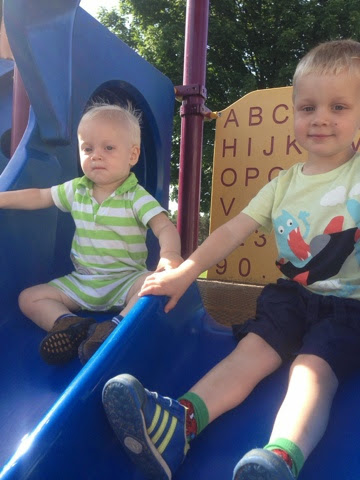 One of the quieter moments between the Brawling Bros.  Right before they started slapping one another while going down the slides.
Posted by Meggie at 3:00 PM