I know it's super boring to talk about the weather (I've never shied away from writing about boring stuff before!  Why start now?)  but it is hotter than Hades here in MN and so what does any sane and sensible woman decide to do?  I drag my entire family around the Minnesota State Fair in 96F weather that equalled 103F with the heat index.  The kids held up better than I did.  I get super cranky in humid
weather and by the time George was starting to lose it in the heat I was way past my comfort point and ready to get back in the AC.  Is it bad or good that my boys can last longer in a public place than I can?  I'm just going to shine the situation up like a new penny and say it's good and shows how well I've raised those boys (and that they've learned to ignore their Mom's whining).

The fair was great though.  The highlight for the boys was a giant slide that is a couple stories high and wavy and riders go down on burlap sacks.  They rode a few times with Grampie and they loved it.  Frank and Dave even screwed up their courage to go down on their own. 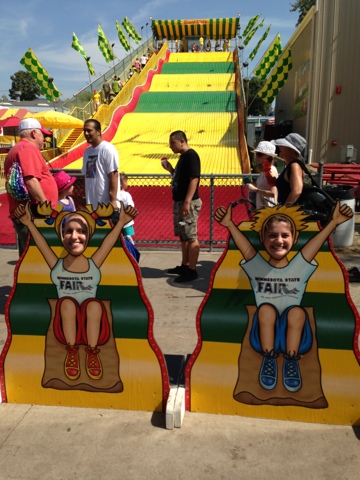 ^^^The Giand Slide in the background.  Me and Marianne in the foreground - weeee!

We went to the Miracle of Birth barn and saw laboring, birthing and post partum farm animals.  We saw a little piglet get dragged out by its feet by a vet student who was up to shoulder in that sow's birth canal.  The boys were a little wide eyed at that display.  Luckily they didn't make any connections between birthing farm animals and birthing moms and we quickly moved on to the chicks making their way out of egg shells to create a diversion and avert any oncoming questions.  It was just too hot to deal with birthing questions today.  They already thought it was funny to compare my pumping and breast pump to the milking parlor where they saw cows being milked and that was enough of a comparitive biology lesson for today in my book. 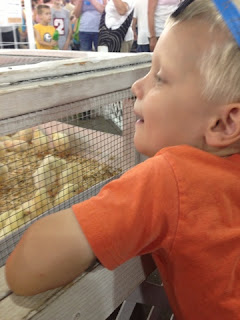 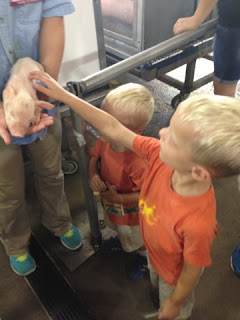 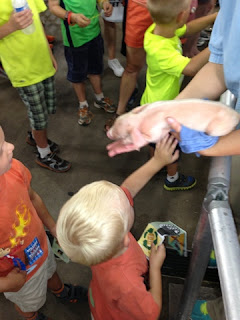 ^^^Yes, I dressed them all in orange shirts on purpose so I could keep track of them. They're so much easier to count when they all look alike

We took a break in the horse arena so I could get George out of the Bjorn and feed him and caught a herding dog competition.  It was so cool seeing those super quick and intelligent dogs herd sheep through fences, over bridges and into a pen.  It reminded me of Babe and I kept saying, "That'll do, Pig.  That'll do." to the boys and they had no idea what I was talking about (not really an uncommon occurence, and often times, they just ignore me.  This was one of those times because they had cool dogs to watch instead of figuring out what the hell I was talking about).  I think Babe needs to be on our to-see list.  Anyone know if it's on Netflix streaming?

A quick list of other things they loved.  Mini donuts, lemonade, Sweet Martha's chocolate cookies, riding the scooter Mimi was using to get around the fair today (although Frank was really bummed it didn't go faster), getting cow tattoos in the cow barn, watching a giant horse drink water from a bucket, fresh pressed apple cider popsicles, climbing a DNR forest fire watch tower, watching the parade, and riding the bus to and from the park and ride.  Phew - seriously?!? - no wonder I'm exhausted. 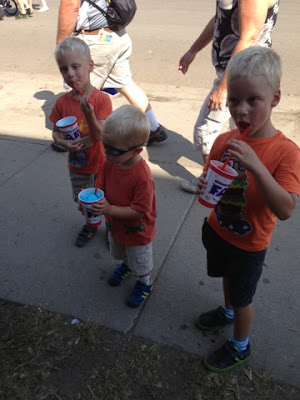 ^^^Icees in both red and blue (they called it "cherry" and "blue raspberry", but let's be honest there is nothing fruit-like in either of those flavors, but they were yummy)

Jerry and I went to the fair on our own as a date night on Saturday to allow ourselves the opportunity to reminisce about what it was like to go places like that before we had kids.  We wandered around aimlessly on no timetable and with barely a thought as to where the closest restroom was at all times, drank beer, ate things without having to share with shorties or blow the food off for ten minutes because it's TOO HOT!!, walked through the Midway ride area and gauked at carnies, and stayed out past ten.  Can't beat that kind of night. 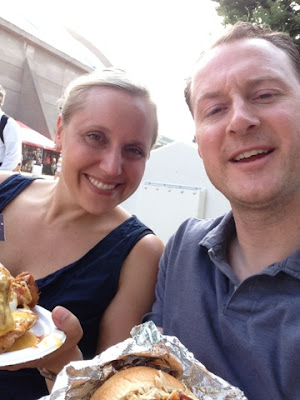 ^^^Each of us with our favorite fair foods - turkey sandwich for Jerry and Australian beer battered potatoes with ranch and cheese sauce.  After all these years I'm still trying to figure out what makes them Australian. 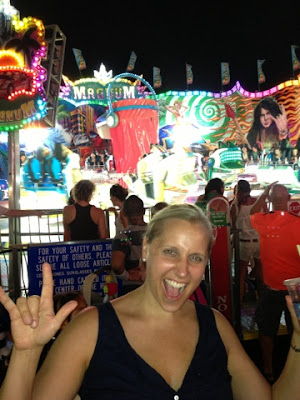 ^^^at the Midway - fond childhood memories of the Magnum PI ride with a giant Coke can wearing sunglasses in the middle.  Sound unfamiliar?  Clearly you are not a child of the 80's then.  Now it's just called "Magnum" for all the Millenials.  Lame - they should've kept it as a tribute to Tom Selleck, that magnificent mustache, and his super short hot pants.

What else did I do this weekend you ask?  I know, you didn't ask and you're already bored to tears, but I'm going to keep going.  Because it was 12,000 degrees out I did what anyone would do when they don't have central air...I boiled a huge vat of water along with a huge vat of brine to bring the dew point in the house up to about 100% humidity and I made pickles.  The boys love, love, love pickles and I love that this is something that I make that they actually consume without complaint.  Canning makes me feel all old-timey and pioneer womanish so that's kind of awesome too.  I wanted to wear a Laura Ingall's style bonnet while I was doing it just to really get in the mood, but could only fine a Princess Leia wig in our costume bag and that didn't convey the same message so I skipped it. 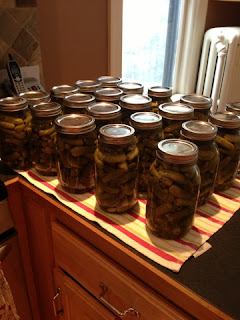 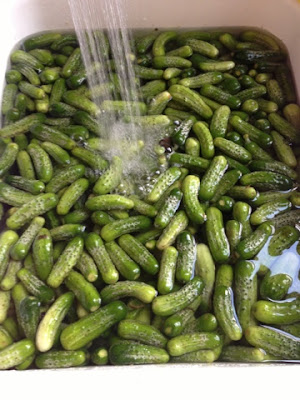 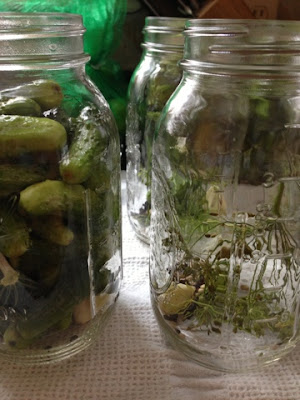 I used my grandmother Fischer's recipe and it is delish.  I got 21 quarts out of my bushel of cukes and while I'd like to think that this haul will last us through the winter, I know it won't.  I can hardly wait to bust into a jar once the loooooong month of pickling is over. Frank has been asking a couple times a day if the pickles are ready.  I've moved the jars down to the basement in an, "out of sight, out of mind" move, but we'll see if it works enough to distract him from his love of briny cukes.

Here is what I wore on Sunday.  Thanks to FLAP for hosting a link up! 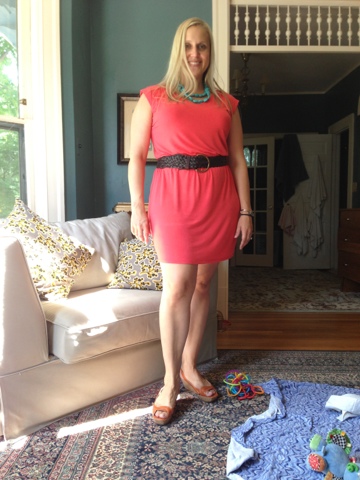 ^^^yep, dirty towels (actually hung up!) and toys on the floor.  The whole house generally looks like that.  For reals y'all.

When we got home from Mass Jerry asked if I saw that there were two other women wearing dresses in the same color and the same style.  I failed to notice that because I was too busy trying to remove the fistfuls of hair Stan had gripped in his sticky grimey hands before he ripped it out.  Did I mention that I have post-partum balding and fine hair to begin with?  The only thing that was distracting me from wispering threats into Stan's ear was shooting my classic Mom looks of "you better stop whatever it is you're up to or I will do something so terrible you can't even imagine it" to Dave and Frank.  I threatened to take away after Mass bagels, but I really wanted an iced coffee from the bagel shop so since they're punishment would've really punished me more I took away electronics for a couple days instead.  Perfect, no bearing on me.  Just the way I like to deal out the consequences.  Ack - I digress - back to the dresses.  So me and matchy ladies at Mass... either means I'm totally on trend, or that I but whatever Old Navy tells me to like a mindless fashion drone.

That about wraps it up.  I've got to be up with George at who knows what time, so I'm outta here.
Posted by Meggie at 11:16 PM