For Posterity... 7 QTs of random

1)  The set-up: Walking home with Dave and Frank last night as we were carrying the sled back from the park. We were discussing how hard it would be to carry four elephants back...

Dave: Carrying two elephants would be hard too.
Me: Yep, it would be really heavy.
Dave: Carrying a half elephant would be even harder.  Because of all the dripping blood and stuff.
Me: ... ... ...

2) We are in the midst of trying to potty train Stan.  Holy cow I hate potty training.  I wish we could fast forward two weeks when I'm going to love being a mom who buys diapers for only one child at Target, but for now it's the pits.  I'm obsessed with asking if he needs to use the bathroom and we have done a lot of laundry.  I've created a monster who knows how to manipulatively urinate and poop to get treats. What that kid won't do for a jelly bean. Alas, I think he's getting it though, and that is enough of that tirade. 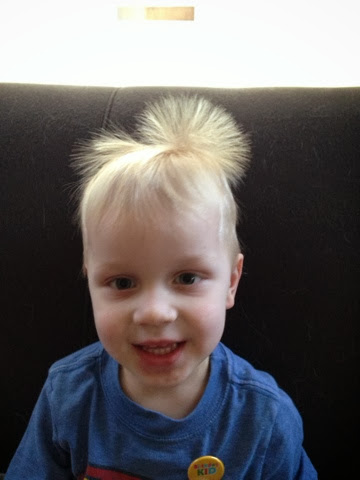 3) It's been a while (again) since I updated.  Excuses - none.  I got nothing.  I will try to be better.  There are so many crazy things that the boys do and I'm trying to tuck them away in my brain to write about later so I have some sort of catalogue of horrors I can show them when they're all grown up but I can't remember any of them.  My brain is a seive.

4) Christmas this year was a wash. Everyone in the house (minus me!) got a stomach virus.  It all started at our Christmas party on December 21.  The kids were running wild, the wine and beer were flowing so parents didn't really care about their feral children and then one of the older kids came up and told me someone puked in the basement.  Lovely.  Sure enough, it was Frank and while he made it to the bathroom, he did not make it to the toilet.  Imagine the bathroom scene from "Trainspotting", now multiply the ick factor by 4.7 and you are in the realm of what I encountered down there.  Needless to say, parents started grabbing their kids and high-tailing it out of our infected house faster than I could throw jars of peanut butter at them (more on that next). Jerry and I couldn't help but think back to our Christmas parties of long ago when they would last until the wee hours and end with people sleeping in random corners of the house too drunk to make it home.  Now, we cleared the place out by 9 pm and were in bed with everything cleaned up by 10 pm waiting for the next puking child to strike.

The contagion spread quickly and one by one everyone fell to the plague.  Except, of course, me. Which, as Dave said, is because I'm the leader of the family and take care of everyone.  Jerry who was sitting nearby piped in with "She's only 51% boss Dave!"

We half-heartedly opened gifts on Christmas Day and stayed in lock-down to try and prevent the spread of our germs.  We still managed to get three of four grandparents sick. We emerged from the illness around New Year's Day and I swore to myself that Christmas would be more fun in 2014. 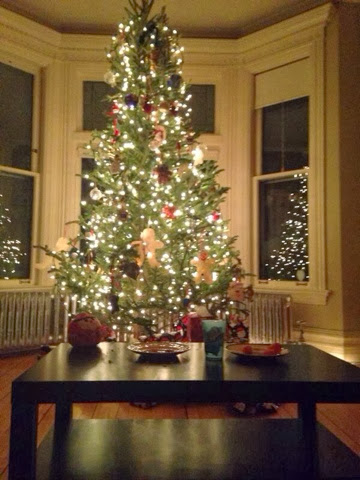 5) Remember George's reaction to peanut butter? Yeah, so he is allergic to peanuts.  Like the full on, we have to carry epi pens around with him kind of peanut allergy. I am amazed at all the things in our house that have peanuts, traces of peanut, or are manufactured in a place where peanuts were at some point.  We did a major clean out of our cupboards and decided we would give away all our peanut goods as door prizes at the Christmas party.  Because I just bought six 2-quart jars of Skippy creamy from Costco we had a lot to hand out. 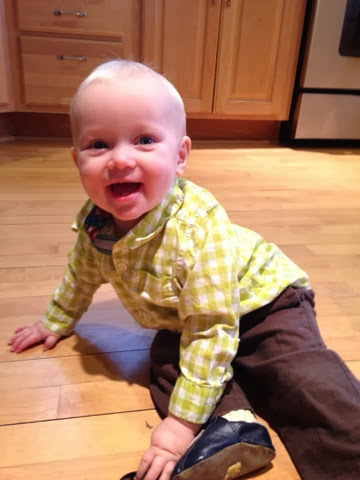 Stan is a peanut butter addict and is taking it pretty hard.  He hasn't come around to soy nut butter, sunflower butter, or almond butter.  Jerry said that our decision to get rid of peanut butter (Stan's main source of nutrtion at this point) is like Sophie's Choice.  We either have the peanut butter around and Stan survives but George could die of anaphylaxis, or we get rid of it and keep George safe and watch Stan wither away to nothing and die of malnutrtion.  George is pretty cute so we opted for peanut butter out at this point.  But we still love Stan and keep sneaking almond butter onto his bread depite loud and cantankerous complaints.

6) I'm going to Chicago this weekend with my cousins and the most important thing that I'm packing is Unisom.  Nothing says party weekend with the girls than Unisom.  Man I can't wait to sleep past 6:17 am.

7) The boys are thoroughly enjoying winter and haven't been put off by the extreme cold we've had. We always said we wanted to raise boys that were comfortable playing outside in any weather, so far I think we can check that box. 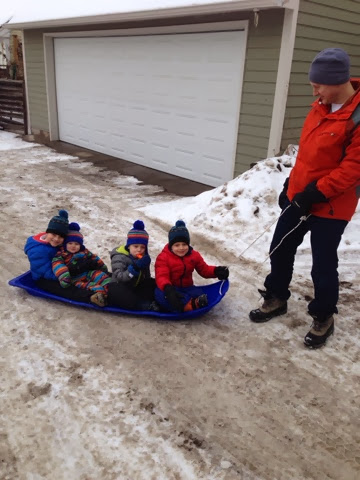 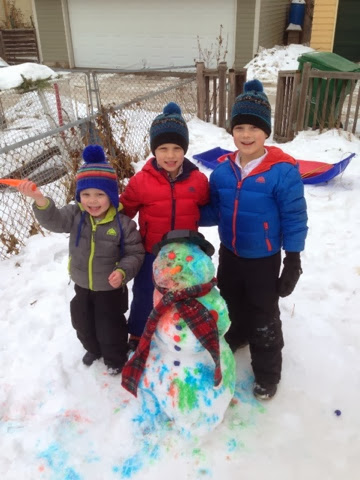 Thanks Jen!  Now go visit some other quick takers.
Posted by Meggie at 2:29 PM