Holy Cats. At first I was just busy, then I couldn't get in my groove to write, then I just got embarrassed that I hadn't written anything in AGES, and now I'm back to do my penance, proclaim mea culpa and get back in the saddle.  Let's just be friends and pretend like the break never happened?  Thanks chicas.

Annoyingly, I'm going to harken waaaaaay back to Halloween and make you read through a holiday that no one cares about anymore because Thanksgiving is fastuponus.
Anywho, the quick and dirty is the older boys were pirates but looked like Halloween hobos, Stan was a precious black kitty demanding candy from strangers with barely a please or thank you said in front of the houses and insteaad was always mumbled on the sidewalk where no one but me could appreciate his politeness, and George was a rhinoceros that really looked like a unicorn because I need to perfect my rhino horn making skillz before I put that baby into production (just kidding, that will never happen, there is no market for poorly homemade baby rhino costumes and I am just barely aware enough to realize this.  Maybe I'll open my Etsy shop next Halloween). 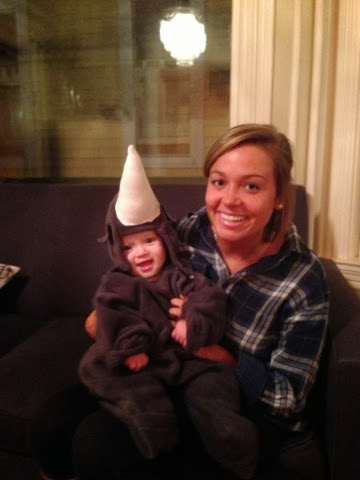 George rocking his rhino/unicorn horn like no other bebe can with his MN Godmom. 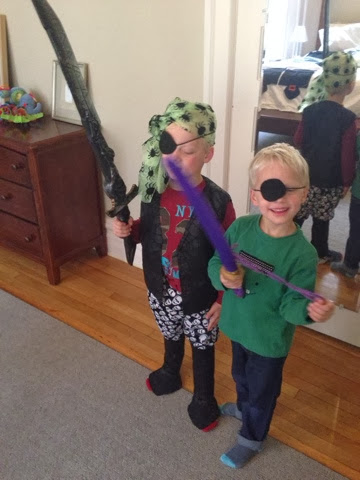 I like this photo because Frank looks like a cyclops pirate -  a whole new level of scary. 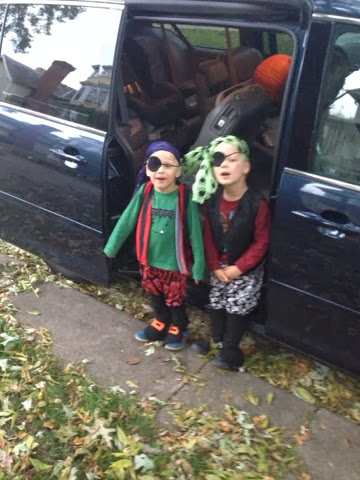 Full pirate dress.
Jerry pulled together a last minute pumpkin head costume that was rad, but painful to wear.  Finally he has a slight glimmer of understanding for what women go through with all their clothing but especially heels, hosiery, bras, thongs, jeans that I can't eat in, and shapewear. However, he got to slip his pumpkin head off at the party and be relieved of all his discomfort.  It's not so cool for me to just take of my bra, thong, and heels at a party and just hang out while I make myself at home.  Always the ladies suffer for fashion.

For those interested for next year's Halloween Fiesta, here's how he made his costume.  Super easy...
You need a pretty large punkin, I'm sure you can imagine why.  It's going on your head smarty-pants. Cut open the pumpkin from the bottom and scoop out the guts. Jerry had to cut and test the head opening a couple times before he got it large enough to fit all his brains in there. He wore a swim cap to keep his locks punkin free. Cut out your pumpkin face too. 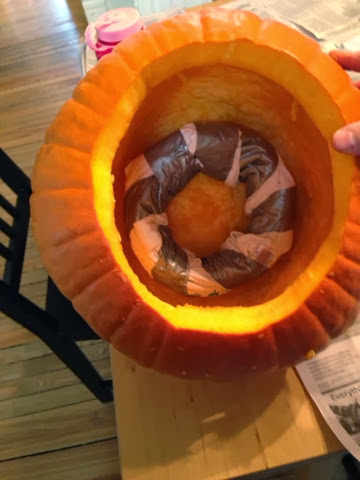 He got all DIY on this costume and made a patent pending "comfort ring" out of a rolled up t-shirt and some duct tape to shape it into a ring.  Put this on the inside stem end so your noggin has something stable to keep the pumpkin balanced. 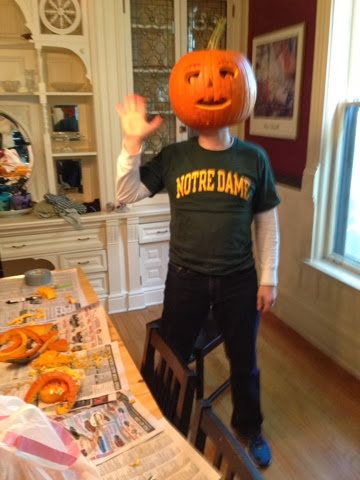 Put on a tux and call it a day. 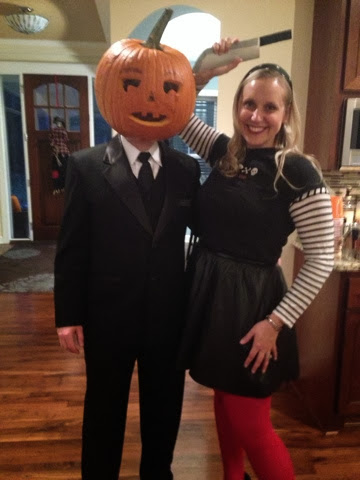 He pulled me into his costume because I had nothing planned for myself after sewing costumes for the four boys.  He let me be his punkin carver.

Stan's favorite part of Halloween was November 1 when I went to Target and on a whim bought him a Dusty costume from Planes for 70% off. 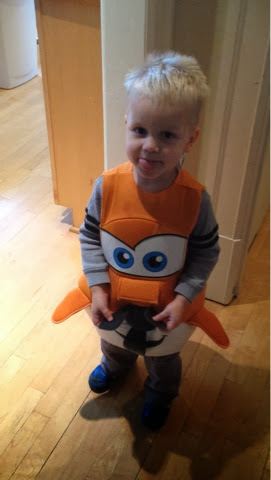 The child has not taken the costume off for a day except for wrestling him out of it to wash it a few times.  He looks adorable and I love and appreciate his loyalty to all things Dusty at this point in his short life.

Okay, that is all the tardy Halloween hoopla I can make you suffer through.