Just hooking up with Jen today for some 7 QTs of stuff.  They really don't go together, it doesn't really flow or make sense, it just comes out fo my brain this way sometimes.  Keep going...

1 - We finally had Dave's first day of school on Monday.  Holy cow this seemed like a loooooong time coming.  I've been hearing and reading other parents expressing that they can't believe their little muffins are off to school so soon and they can't believe that the time has passed so quickly.  I could not disagree more.
Holy heavens it has been one long haul to get a kid finally off to school.  Driving the van full o' boys to school I was thinking, "This is great - all this tuition is buying me freedom!  Dave to kindergarten and Frank in preschool for a few hours - Freedom!" Ok, not really, I still had Stan and George to contend with, but that was peanuts compared to the full craziness of all four boys. 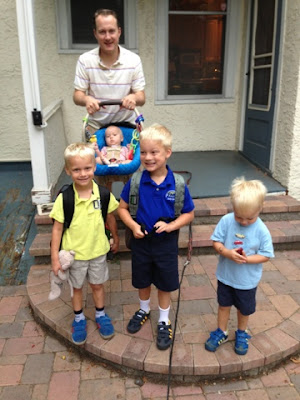 My heart strings were tugged a bit when Dave leaned over to look at Frank in his car seat and said with more emotion than I'm used to seeing in him, "Frank I'm gonna miss you today.  I'll see you tonight." Then Frank simply and soberly says "I'll miss you too Dave."  Those two have never been apart for too long and they are thick as thieves.  Their impending separation was probably setting in.

I got a little misty too when his class lined up to go inside and as Dave started to move forward he turned back and waved at Jerry and me.  Big backpack on (Plants vs Zombies - of course, it has to be zombies), uniform on (it was so hot on Monday the school said the kids could be out of uniform, but D was so excited and proud of his uniform, he wore it anyway.  Love it! - I can't wait to bring that up in high school when he's complaining about wearing a uniform), and he was steady as could be.  No hesitation from him, but I have to admit, it was crazy to see this confident kid in front of me when I remember the tiny, wrinkled, red, screaming preemie that was whisked away from me to go to the NICU.

2 - Frank entrusted Piggy to me while he was at preschool.  Thought I'd better keep him really safe. Last year Piggy was a stow-away in Frank's backpack every Tuesday and Thursday when Frank would go to school.  Piggy would legitimately go to school with Frank once a month as Frank's Show and Tell item.  Every single month the same thing for Show and Tell.  That boy loves his Piggy. 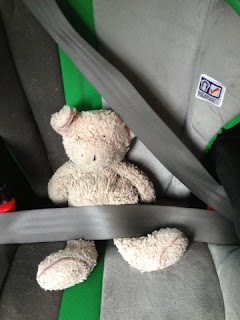 3 - It was so quiet getting back home with only two (TWO!!) boys.  I started thinking of all the things I could get done with only two boys to keep out of trouble.  Stan pulled me away from my mental list making when he kept asking me to play.  Crap, I had totally overlooked that Stan's usual playmates who I regularly pawned Stan off on were now in school.  I looked left, I looked right - no one there to entertain Stan, just me.

Reluctantly, switching gears from getting tasks done to playing, I got down on the floor and we started reading.  It was great.  It was quiet and calm.  There was no one running around and screaming about zombie attacks, ninja blades, or pirate bullets.  Just Stan on my lap and George rolling around on the floor happily gumming up the Scooby Doo figurines in his path.  We read Maisy Goes on Vacation seven times.  I loved it.  I think I'm gonna get used to this two kids thing for part of the day. 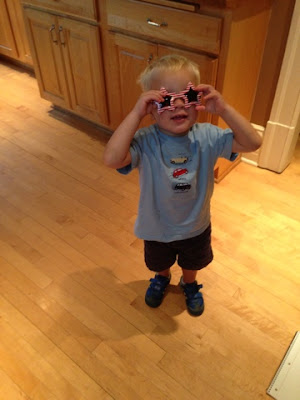 4 - Seeing as this is the most super exciting blog out there I wanted to take a little time to talk about canning.  Again.  I know, contain your excitment and read on. 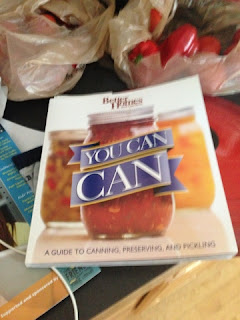 ^^^The book has a lot of confidence in me.  I think it's a bit premature to actually say "I can can", but no food borne illness yet.  Fingers crossed!

I finally had grape jelly success the other day.  I amped up the sugar content and low and behold the whole mixture magically turned into a hot enough mess to actually solidify.  I can now proudly stand by my 7 half pints of hard earned jelly and breathe a sigh of relief that the project is finished and I don't need to figure out what to do with 7 half pints of grape syrup (I was picturing a daily diet of grape sno-cones.  Not necessarily a bad thing, but heading into fall it just sounded out of season and goose-bumpy). 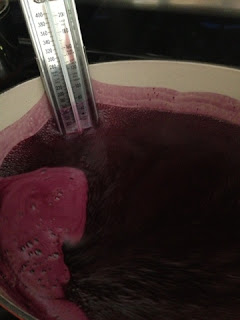 I think the jelly tastes super sweet now with the four additional cups of sugar I needed to add.  Like coat your tongue and tooth-achingly sweet.  But the boys don't seem to mind. 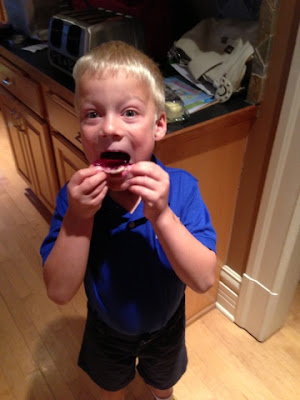 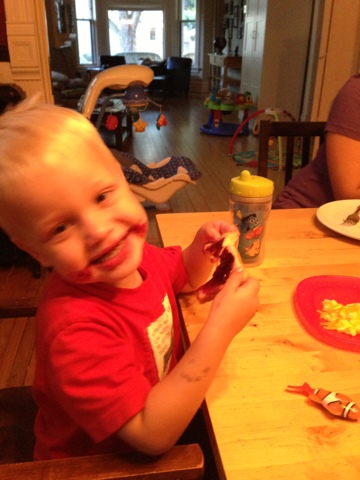 5 - A conversation I overheard between Dave and Frank while Stella was digging in my yard.  I think it has something to do with Plants vs Zombies, but I really don't know for sure.

Frank: I hope Stella doesn't dig up any zombies.  I'm scared of those zombies that live in the ground and dig to China.

Dave: Fwaaank, you don't need to worry 'bout zombies.  They're not real.

Dave:  but I think China is real and that's scary.

6 - George took his innagural stroll in the stroller out of his infant seat.  That kid was so happy watching his brothers and looking at the world around him. 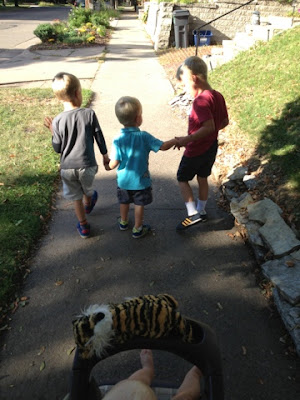 ^^^Stan insisting that Dave and Frank hold his hands while we walk.  They complied after numerous threats that all desserts, snacks, movies, and fun would be taken away if they didn't hold his hands.  Dave was complaining that his hand would smell like Stan now.  So, it will smell like syrup?  Because that's the only discernable smell I got off of Stan yesterday.  Gotta love brothers.

7 - George made his debut at the dinner table this week.  He's graduated from the floor to his high chair and he's adoring the upgrade.  He can watch his brothers crush my cooking ego by never eating a dang thing that comes out of my kitchen, occupy himself by bringing puffs to his mouth and missing every time, and feed Stella all at once.  He is now a much busier baby during dinner time. 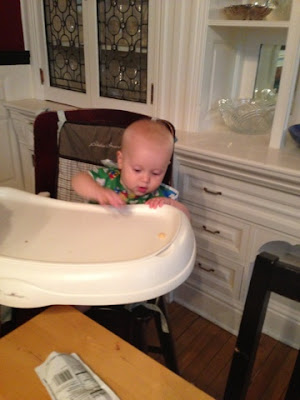 That's it for the week.  These weren't really quick takes at all. They were rather longish.  Maybe 13% of you actually made it to the end of this post.  Congratulations and I curtsy to all of you.
Posted by Meggie at 6:02 AM