What the?  Where the? How is it after Labor Day now?  I know I shouldn't be surprised, but holy cow this summer seemed to breeze by.  We tried to fit in a ton last week and while the boys don't start school until Monday, it's really hitting me that we are in the colder end of summer for sure.

I tried to conitnue my canning glory and instead got an epic fail.
And, by glory I mean that I dabble in it. I'm a total novice and have no idea what I'm doing (clearly it's showing in the end result now).  I've read a lot of books, blogs, University of Minnesota extension websites to try and ensure that I will not poison my family with botulism.  But, really, who knows?  Can't really be sure until you eat the stuff right?  Maybe that's why I like it.  It's serious risk taking in the kitchen with death as the possible outcome.  Seems pretty bad ass.  Aaaaaaand I digress.

Back on task, I tried to make and can some grape jelly today.  I had previously done all the boring work of stemming, peeling, seeding, straining, and simmering those pesky tiny grapes. I just had to simmer it with some sugar and get that magic liquid into jars.  I got my juice simmering and tasted it and thought "hmmm, this is pretty sweet, I don't think I'll add much sugar" so I added 1c of sugar to 12c of grape juice instead of the 5c it called for.  Not my most genius move. Apparently I need all that extra sugar to make the magic liquid gel into a jelly.  So, I have several half pint jars of grape syrup canned up. Yum (that is to be read with lots of dripping sarcasm.  Like as dripping as my eight half pint jars of drippy grape syrup).  I have now been googling "ack - my grape jelly won't set".  I shall prevail...later. 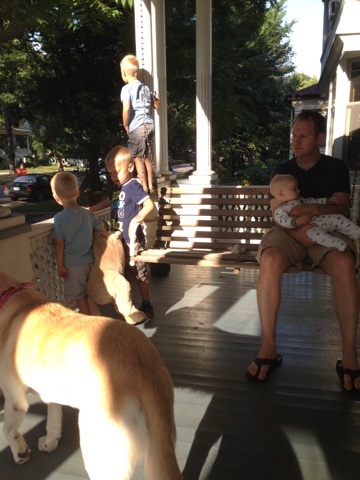 Here's what the rest of family did while I was slaving in the kitchen over boiling cauldrons of boiling grape syrup.
On a positive pickling note, we're still waiting for the dill pickles to sit until 9/24 before we dive in.  Frank is still asking daily when they'll be ready.  Why are they so interested and concerned about time when their concept of it is so minimal?  Drives me nuts.

I'd still like to can some pickled carrots and green beans.  I'm thinking maybe some picled spicy cauliflower?

What are some of your favorites things to can?  Any recipes or tips to share with a novice?
Posted by Meggie at 1:17 PM