Taking the Easy Way Out

I'm hookin up with Hallie for the Five Favorites and I wanted to show some of my favorite photos from the last few days. 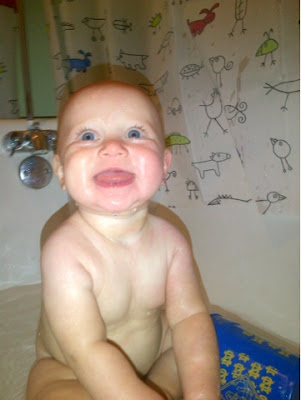 Life has gotten easier around here now that this little man is bathing sitting up.  As Grace has mentioned in a
few of her posts and Grams, it is so great once all the kids can sit up in the tub together.  We have the added bonus that two of ours have graduated to the shower, so now it's just George and Stan left fighting for toys and tub space. 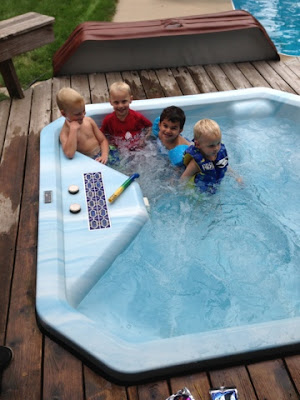 "One of these things is not like the other..." Hey, where'd that dark-haired kid come from?  Here's the boys hanging out with their cousin in the hot tub at my parents' trying to soak up and squeeze out every last smidgen of summer we can get.  Pool closing is this weekend, so we've got one more chilly weekend to pretend like it's warm and drink margaritas poolside in sandals.  Then it's almost straight to the Uggs we go. 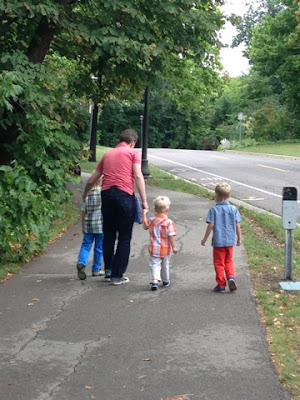 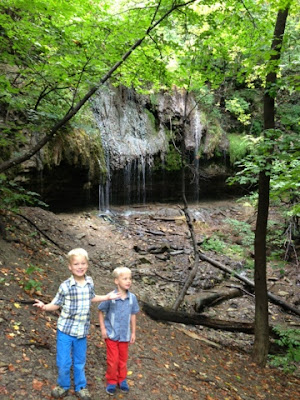 This was our Sunday activity.  This was taken when we were technically supposed to be at Mass.  We went at our normal time and pulled up for 9:30 Mass at 9:28.  Parking was miraculously easy.  We rush all the boys in and see darknesss and quiet everywhere.  As we're puzzling over what is going on, our priest shows up on the stairs in his vestments and tells us that Mass isn't for another hour due to the parish festival... as he announced last week. BUSTED!!  Totally didn't make it last week - sorry Father.  Our warped thinking was that God understood we had made an effort and so we went on a short hike along the river and said some prayers in nature.  Above is Jerry sheparding the little folk so they didn't get run down by bicyclists.  The boys subsequently ruined their church shoes and pants on the muddy trails and I guess that is God winking at me for skipping Mass. 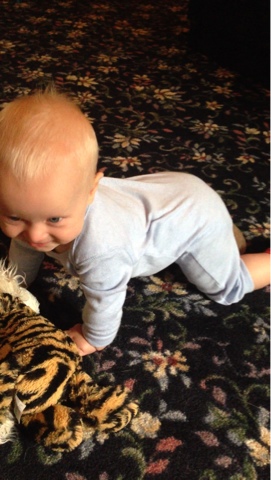 In addition to sitting up in the tub George is on the verge of crawling.  He is doing his rock back and forth on all fores and it will not be long before we need the baby gates.  See that mischievious grin...I can just see him hatching plans for when he finally gets mobile. 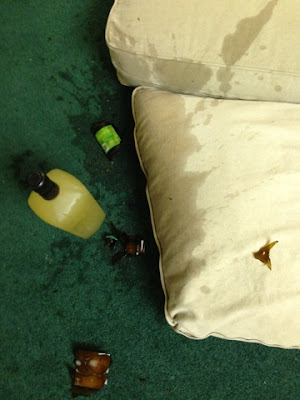 Congratulations to those of you who made it to the end of this post, you get the most entertaining (alarming?) short.  This is the scene Jerry was greeted with in our basement last night while I was at book club.  Yep, a large unharmed bottle of margarita and a broken beer bottle.  From what he could surmise from the snitches (ahem Dave and Frank) who ratted Stan out only once the bottle was broken (why couldn't they have squealed on him when this fiasco was in process? Oh yeah, they wanted to witness the calamity), Stan was throwing the beer bottle at the margarita bottle.  Awesome.

Holy Hell, Stan - that is a waste of good alcohol!  For Pete's sake, what were you trying to accomplish?  Couldn't find a opener in the basement?  I've been there, man, trust me.  I've been stuck on many a camping trip, random hotel room, or house party gone wrong when I couldn't find anything to open my bottle of liquor.  I've smacked the bottom of bottles against trees, shoved a screwdriver into a wine cork, tried the old pop the cap off with a class ring trick (John you're my hero at doing that!) - but throwing one bottle at another.  I think that's just asinine.  Think it through next time buddy.

In fact, while I was in the hospital following Stan's delivery Jerry brought me scotch ale which I had been craving the entire pregnancy...and no opener.  I didn't think the nurses would be particularly amused with my request for a bottle opener so Jerry opened it on the door latch and sprayed my whole room with beer in the process.  Then we spilled a bottle of beer trying to hide it when a nurse walked in.  We're idiots and my room smelled like a brewery the rest of the stay.  Maybe Stan was imprinted with some weird bad bottle opening experience from that after-birth experience.

Jerry had to mop up beer and glass, shame and send off to extended time-out the offending tot, sternly talk to the olders for perhaps egging their younger bro on, and then get the whole motley crew to bed.  I am so sorry I missed that fiasco while at book club.  Thank you God for book club.  Now my basement both looks like and smells like a fraternity after rush.
Posted by Meggie at 3:47 PM