Just to be clear I am not talking about the new little English sproutlet born on the other side of the pond.  I'm talking about my George!  I'm a little bitter that Kate and William decided to name their bebe George after we had firmly claimed the name for ours in February.  I'm guessing there will be an uptick of Georges now and his kindergarten class in 2018 will have four of them.

Here are a few ways we'll be able to tell our George from theirs...

1.  Handsome-ness - My George is clearly a looker.  He had five teenage girls in Church batting their eyes, smiling sweetly and not listening to a thing during homily because he knows how to bring all the girls to the yard.  I'd say the jury is still out on their George at least until he gets rid of the newborn wrinkled look.

2.  Intelligence - I have mentioned that my George loves to suck his toes and he knows enough not to eat them.  Enough said.

3.  Survival Skills - My George has three brothers ages 6, 4, and 2.  In the short almost five months he has been alive he has learned to duck and weave with the best of them.  There is a constant threat of getting stepped on, rolling onto long forgotten Legos, bad guys (even good guys sometimes) being chucked in his general direction, and having three teensy-bit over-enthusiastic brothers playing patty cake or peek-a-boo and nearly taking him out with their "play".  This kid will know how to take a blow and keep going.  Their George is the only for now and if I remember correctly back to the sweet days of having only one child to tend to, there is nary a danger in sight.  And that wasn't even with a bevy of royal nannies to help out.

4. Middle Names - My George has one, theirs two.  I think this makes their George fancier, so maybe I'll cede this point to them.  Hazzah Kate and William!

5. Humor (or humour for the Windsors who may be reading this) - Again, methinks the advantage goes to the George with more brothers.  I am happy to report our house is full of jokes involving the words fart, poopy, stinky butt and pooty (I don't even know what it means).  Even better, the boys are consistently their own best audience.  One word and they are all rolling on the ground laughing uncontrollably.  I am often the straight man for knock-knock jokes told out of order, with the wrong punch line, or with no endings at all.  Somehow they still think it's hilarious every single time.  My George has a lot of entertainment around him and he's sure to pick up on some of it.  Their George has his Uncle Harry, but I'm sure the palace will still get a little stuffy sometimes.

6.  Fashion - Sure, their George may have a Stella McCartney original onesie, but my George has an original design onesie too.  With a head shot of The Hoff circa Knight Rider.  That's right, I'll take that point. 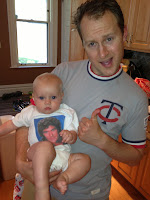 Oh well, maybe the Georges can be buddies someday.  Congrats to the new family!﻿
Posted by Meggie at 1:33 PM

Email ThisBlogThis!Share to TwitterShare to FacebookShare to Pinterest
Labels: George, The Hoff