Here it is, nearing the end of another week....
Thanks Jen for hosting the link-up

1) Last night was a dream come true for the boys.  They had hip hop class followed by Dairy Queen... 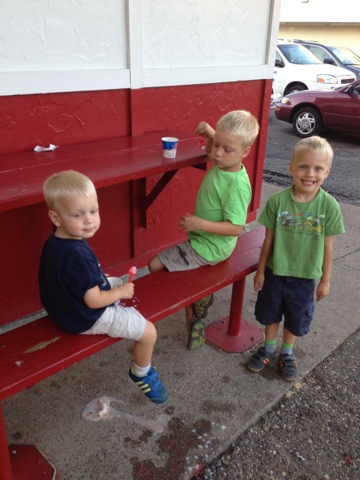 ^^^notice half of Stan's m&m blizzard sadly melting under the bench.  Bwah bwah.  Frank wins both the ice cream speed eating contest and the always
ready for a photo prize - my other two not so much.

...and then they earned the Cars 2 DVD with no time-outs the last five days (miracle of miracles) 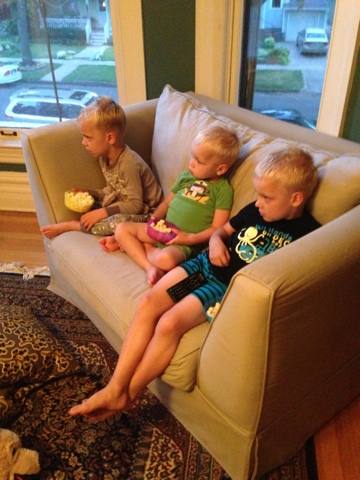 ^^^not even Frank could pose for a photo-op.  This movie is apparently the Argo of the little boy set.  Seriously fast-paced and glued to your seat suspenseful 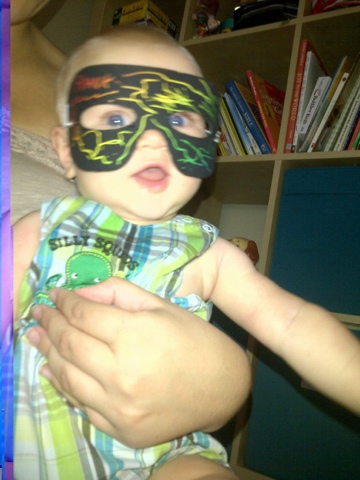 3) Jerry was on a work trip this week and got home about five minutes after the boys finally fell asleep.  They were missing him so much I told him to go wake them up and say g'night.  Cutest sleepy g'night kisses and hugs ever with lots of "extras" thrown in (just meaning repetitive face smothering with kisses and hugs).

4) Jerry's parents are taking Dave and Frank for a sleep over tonight and we'll be down to two kids.  It'll feel so strange to be back on man-to-man defense.  What will Stan do with all than extra attention?  That kid is used to being one of the bunch and may not ever want to go back to being one of four boys once he has a taste of the sweet life of one on one attention.

5) My cousin had a baby girl this week and I loved snuggling on her sweet little two day old body.  I know everyone says this but you forget how much changes in six months.  George looks like a giant monster next to Isa and he definitely no longer has that cuddle against you moldable body - he's more in the lay his big, heavy, sleepy body out across my lap kind of stage.

6) Stella finally got a bath this week 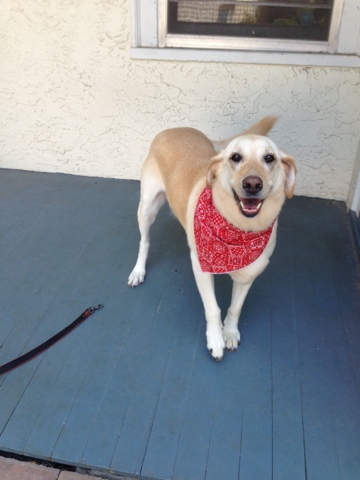 ...and then came directly home and laid in the dirt hole she insists on digging in the middle of my yard.  Honestly, I'm not sure what makes me more annoyed - that I paid for her to be clean and sweet smelling and it lasted for four mintues or that she keeps digging that blessed hole.  I've heard that the best way to foil digging in a particular spot is to fill the hole and then cover it with chicken wire.  Has anyone tried this?  I'm sure she'll find another spot, but maybe one less conspicuous would be appreciated.  Stan has decided the hole is a sand box and now it's a competition between Stella and him to see who can get back there first and claim it for the day.

7) I got my stuff from Target that I ordered last week and the box is of course a huge hit. 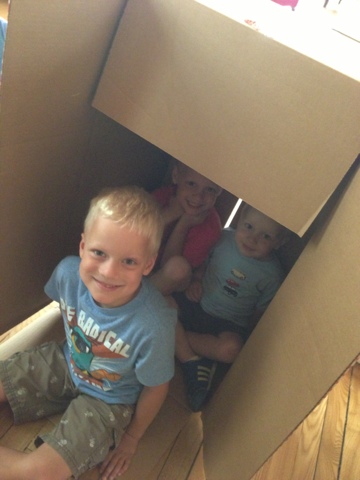 Hope everyone has a great weekend!
Zai-jian! (that's see you later in Mandarin - I'm going to blow the boys' minds when I lay that little nugget of knowledge on them)
Posted by Meggie at 11:06 AM